Daughter raises over £5,700 after shaving head in support of mum

Vicci Hughes, from Bathgate, chopped off her long locks with her mum, Alison McDonald, and her two daughters, Georgia and Amber, by her side. 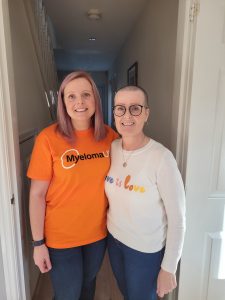 The 38-year-old police detective said:
“My mum actually filmed the shave for me, cried most of the way through then gave me a huge hug after. She thought it looked really good though and everyone I’ve spoken to thinks I really suit it – perhaps they are just being nice, but the response has been phenomenal. I know my mum feels quite emotional about losing her hair on top of everything else that’s going on so I just wanted to make her feel better about it; I thought we could go bald together.”

Never one to complain, 56-year-old Alison, from South Edinburgh, stoically endured months of excruciating back and rib pain, assuming she had pulled a muscle, before being admitted to hospital back in April 2021. What both she and doctors had dismissed as mere muscular pain turned out to be multiple spinal fractures caused by myeloma. By the time she was hospitalised, she had “shrunk” 4 inches in height.

“It was a bit of a shock. I think my mum has quite a high pain threshold. She’s one of those folk who doesn’t like to cause a fuss and so just got on with things. We just couldn’t believe it. You think your mum is going to be there forever. My mum is a brilliant human being. She’s spent most of her life as a single mum bringing up four kids and being a carer to my 24-year-old sister Ashley, who has Down Syndrome and needs all-day supervision and additional support. She has been an amazing nana to my two girls and they adore her. She doesn’t complain, she doesn’t wallow in self-pity, she just carries on with grit and determination every single day.” 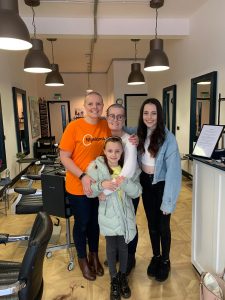 Vicci is determined to do her part to help fund vital research into life-extending treatments and give her recently-engaged mother a few more precious years of happiness.
“Advances in medicine now mean that people with myeloma are able to be treated for a number of years often living relatively normal lives for much of this but it is believed that in the future, a cure can be found. I live in hope for this cure or at least even better treatments to allow my mum to live her life to the fullest for as long as possible. Last year she finally got engaged and moved in with her partner of 17 years. They plan to get married in the near future and deserve so many happy years together.”

To make a donation, head to Vicci’s JustGiving page.