Myeloma patient, Andy Hamilton, shares his experiences of myeloma and how his diagnosis caused family friend Barbara Stonehouse to become a key supporter of Myeloma UK

59-year-old Andy lives in Edinburgh with his wife, Usa. Andy was diagnosed with myeloma in August 2008 after regularly visiting his GP because of worsening back pain and fatigue he had been experiencing for a year. A friend advised him to go for a private health check which led him to organise blood tests, and it was confirmed that it was myeloma. Soon after this, he started treatment including two stem cell transplants and lenalidomide.

Throughout his diagnosis, Andy has often turned to Myeloma UK for information and support:

“I have attended nine Myeloma UK Infodays which are full of reassuring information and good reliable advice.

It is very reassuring to know that the Myeloma Infoline is only a phone call away if I am having problems or am requiring information about treatments. I also go to the local Myeloma UK support Group which is a good way to find out about other people’s myeloma journeys.”

Because of Andy’s diagnosis, family friend Barbara Stonehouse started to take an interest in the work of Myeloma UK, particularly on learning the organisation originated in North Berwick, where she lived.

“Barbara was a close friend of my mother, and I got to know her from a very young age since she stayed just across the road from where my family lived. Over time she became an increasingly close friend of our family, and gradually she became a regular visitor to our house. She eventually became part of the family, and she almost always joined us for family holidays.

She came with me to some Myeloma UK Infodays, and she was very impressed with the information, advice and assistance that was being developed and passed on to patients.”

Barbara started donating to Myeloma UK in 2010, and sent donations a couple of times every year. She raised funds in lieu of receiving presents for her 90th Birthday and was a faithful Myeloma UK Christmas card buyer, purchasing packs every Christmas to help raise awareness. She told us that Andy had become like an adopted son to her and she wanted to do all she could to help him.

When Barbara sadly passed away in January 2019, Myeloma UK was amazed to discover she had left the charity a gift in her will amounting to over £276,000.

Speaking of her legacy, Andy said:

“Barbara was hoping for a positive impact on my life from the research that Myeloma UK funds. Myeloma UK invests a lot of money in both research and support, and this gift will be used to help many patients and their families.”

When asked what he hopes the legacy will help with, Andy said:

“Research is very important. This can be seen from the number of new treatments that have become available in the last ten years, and also from the new treatments that are in the pipeline, which will hopefully make a positive impact on the quality of life of myeloma patients in the future.

Jason Dyer, Director of Income Generation, said of the gift:

“We are so grateful to Barbara for this wonderful gift left to Myeloma UK in her will. It is a fantastic legacy to invest in helping her friend Andy and the thousands of other myeloma patients who benefit from our work on a daily basis. We couldn’t achieve all we do without amazing supporters like Barbara.”

If you would like to leave a gift in your will to Myeloma UK, and help us to continue with our important work, please get in touch with our fundraising team on 0131 557 3332 or email fundraising@myeloma.org.uk. 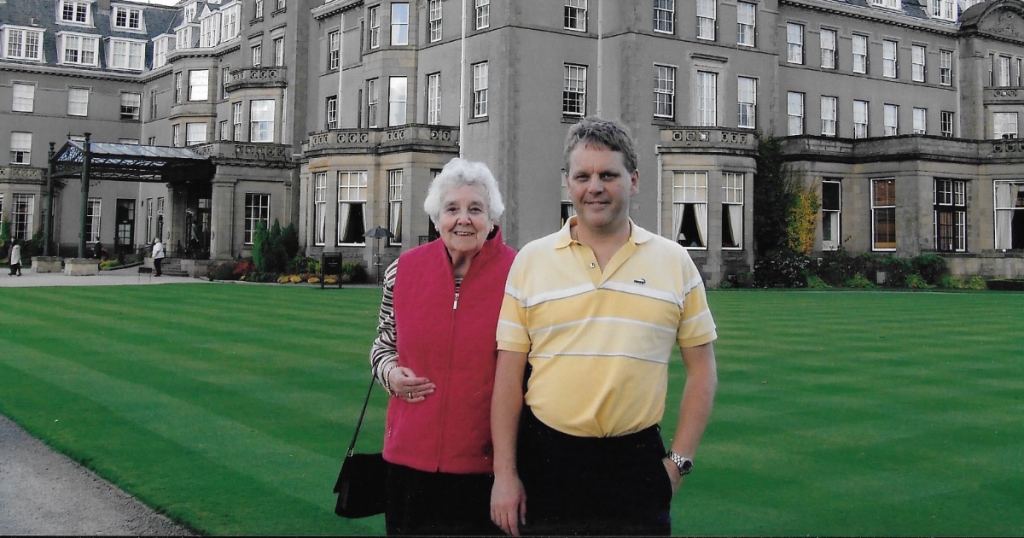 Barbara Stonehouse was born in Leith, Edinburgh in 1927 and attended Leith Academy. After leaving school, she began working at the Bank of Scotland. She left the bank after she got married to join her husband in running his grocery store in the Haymarket area of Edinburgh. Barbara had always been an enthusiastic singer and was part of the choir for the local church. She was also a member of the Bohemians Theatre Group, and later together with Andy’s mum, became heavily involved in costume preparation for their stage shows. She bought a flat as a holiday home on the waterfront in North Berwick in 1997 after her husband died. She later moved from Edinburgh to North Berwick permanently when she started experiencing age-related medical issues, as the flat was easier to manage, and lived out the rest of her life there.