Charles Montlake raised £16,448 for Myeloma UK by walking back and forth from his home in Greenwich to the 02 arena

The 59-year-old, who suffers from myeloma and the related condition AL amyloidosis, completed the 26.2 miles in four stretches and just over ten hours.

He was joined by 35 friends and family members throughout the day: 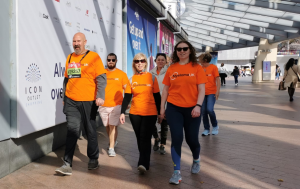 “It took over ten hours but we did it. Donations are still coming in and I hope we can raise £20,000 for Myeloma UK. If it wasn’t for the charity and the information they provide to GPs and doctors, I don’t think my nephrologist would have suspected I had myeloma and I wouldn’t have been diagnosed early. I had a whole group of people on every leg with me – about 35 people joined me in total. I had a good laugh every time and it was absolutely lovely to have people I know and love with me. I’ve been amused at seeing them all shattered after just one leg!”

The gruelling walk was his second virtual challenge for Myeloma UK. Last year, Charles, his wife, son and 87-year-old mother completed a marathon relay, each taking turns walking up and down their flat’s 11m balcony. They clocked up no fewer than 3,000 lengths over 10 hours to reach the symbolic finish line, raising just shy of £12,000 in the process.

“You spend your life putting things off until tomorrow but I can’t. My oncologist told me a year ago that my prognosis was seven to 10 years. I could spend the next seven years or so I have left bemoaning the fact that I only have seven years to live or I could spend the next seven years living them. I know that my myeloma will come back and steal my energy again – it creeps up on you. But while I’ve got energy I thought I would do something useful.”

Charles had been feeling “weary and out of kilter” for months when he consulted his GP. He was referred to numerous consultants, but none could pinpoint the cause of his symptoms. Until, finally, a kidney specialist diagnosed him with renal failure. She ordered further tests. Within days he was told he had myeloma and AL amyloidosis.

“My first thought when I was told I had incurable cancer was, ‘Thank God, I know what it is now’. I’d seen one doctor after another, all telling me that everything was fine with me. I knew everything was not fine; but, of course, with blood cancer you can’t pinpoint it. All you can say is that you’re out of kilter.”

This initial burst of relief was soon replaced by anguish, however.

“When I realised it was incurable relief turned to despair. I got angry at the universe. Not only do I know that within a few years I’m going to die but I actually know how I’m going to die and that takes a bit of getting your head around. It got easier when I came out of the ‘myeloma closet’ around March 2020. The more I told people and the more I talked about it, the easier it became.”

Charles immediately underwent treatment. He was due to receive high-dose therapy and a stem cell transplant, but the procedure was postponed three times and eventually cancelled altogether after he kept testing positive for COVID-19. He was instead put on a fresh course of treatment and has been in partial remission ever since.

Myeloma UK proved “a lifeline” as successive rounds of treatment and the inescapability of his prognosis began to take a physical and emotional toll.

“In my early days and in my dark days which, fortunately, are few, I’ve turned to the Myeloma UK website and newsletter,” he explained. “When I say Myeloma UK is my lifeline, I mean it. There are times when people like me need a lifeline and Myeloma UK is there when we need them. It’s an amazing thing to know. I’ve relied on Myeloma UK more than once for my mental wellbeing and I feel there’s going to come a time when my family will be really reliant on the information provided by the charity.”

To make a donation, head to uk.virginmoneygiving.com/charlesmontlake