Myeloma patient walks daughter down the aisle despite COVID-19 restrictions

30-year-old Deborah lives in the small village of Barlby, North Yorkshire with her partner Lee. The couple were planning to marry this year but their wedding plans were turned upside down due to the COVID-19 restrictions.  Instead of the 50 guests they had intended, they had to scale back to just 9, but this didn’t stop them having a beautiful day. The couple wanted to support Myeloma UK so gave Myeloma UK favours and pin badges to their guests. 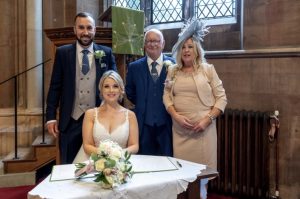 We asked Deborah why they chose to support Myeloma UK on their wedding day and she explained that her father was diagnosed with myeloma in 2007, a day which sticks vividly in her memory.

“I remember the day as though it was yesterday, down to the outfit I was wearing and where I was when we got the call. Dad hadn’t been feeling himself, so he had a routine blood test at our local Doctors. And then that was the day we got the call from dad’s GP. We were told he had to make his way to York hospital as soon as possible and there would be a team there waiting for him.
I was 17 at the time, but I knew something wasn’t right.”

After multiple tests, the family were told that he had myeloma, and Deborah’s dad soon started treatment.

“When we were just getting used to it and getting our heads around all the treatment, the doctors told us they had found a cyst on one of dad’s kidneys. After more tests, we were then told the heart-breaking news that it was a huge tumour. On a scale of 1-5, it was a 4 and needed to be removed as soon as possible. So, as well as battling myeloma, now my dad was to go through a huge operation to remove his kidney.”

This all happened very quickly, within just two months of his diagnosis. The following year, he had a stem cell transplant at St James Hospital in Leeds.

“It was a very challenging and upsetting time for us all. As well as my dad battling all of this, he also has a stoma bag which he had when he was 37 years old due to being diagnosed with ulcerated colitis.”

Looking to the present, the family still have ups and downs, but Deborah’s father’s myeloma is currently stable.

“My dad is my absolute hero. He has fought so much in his life (as you can see) but, he takes everything in his stride he never moans or acts like the victim. He has had so many operations and treatments, and some people I guess would want to give up but my dad finds the strength every single time and fights with everything he has. As a family, we are so strong and so blessed to have so much love for each other. My mum is our rock who holds us all together.” 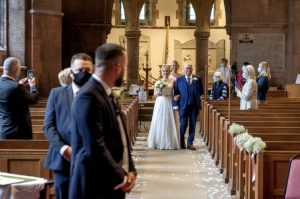 “It was the proudest moment of my life to have my dad walk me down the aisle. If I am honest with myself, there were probably some days over the 13 years that I never thought my dad would be here. That is why it was even more special. The dialysis has made my dad quite unwell, as it has taken a while for his body to get used to it.

He went through a lot of months where he had a lot of dizzy spells, so Dad was one of the main reasons why we decided to have more of an intimate day. We wanted to take advantage of Dad not feeling dizzy and feeling better in himself.”

Why Deborah and Lee included Myeloma UK in their big day:

“When it came to wedding favours, we had already decided, after seeing a post on the Facebook page last year, that we wanted to have the beautiful Myeloma UK wedding favour cards and also the pin badges for all of our guests. Myeloma is clearly a huge part of our life and watching my dad fight over the years; I wanted to give a little back and make a donation as well as having the wedding favours on our day. They looked absolutely beautiful, and my dad was so touched by this, as we hadn’t shared that we would be having these as wedding favours.”

“I will always be eternally grateful for all of the treatment my dad has had over the last 13 years so by donating to Myeloma UK we just wanted to give a little back.”

When asked about her hopes for the future, Deborah said:

“My hope for the future is for all myeloma patients to hear more stories like ours. When my dad first got diagnosed, he was given two years to live. 13 years on he is still with us. Yes, it hasn’t been an easy road, but my dad continues to fight with every single ounce of strength he has, and I hope a lot of myeloma patients and families get hope from our story.” 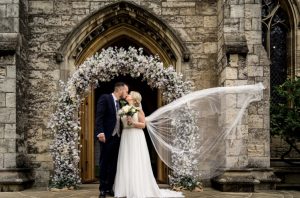 “On behalf of everyone at Myeloma UK we want to offer our warmest congratulations to Deborah and Lee Pearson on their recent marriage and wish them a very happy future together. We are so pleased that they chose to include Myeloma UK in their special celebration and that they wanted to share their story to bring hope to others affected by myeloma.”

If you know someone who is planning a wedding or celebrating a special occasion and would like to raise awareness and funds for Myeloma UK please get in touch with the fundraising team by email at fundraising@myeloma.org.uk or call 0131 557 3332.