Myeloma UK, have been announced as Cheltenham Town Ladies’ new Tracksuit Sponsor, after being nominated by Tim and Michael Dudding for the 2020/21 Sponsorship Lottery.
The Lottery, announced in late June, was opened up to local businesses, with both Tracksuit and Training Shirt cards allowing for individuals to buy squares and nominate charities due to popular demand in July. The two lotteries offered prizes ranging from a signed football and a chance to meet the players to a chosen business or charity having their logo displayed on the specified item of kit. 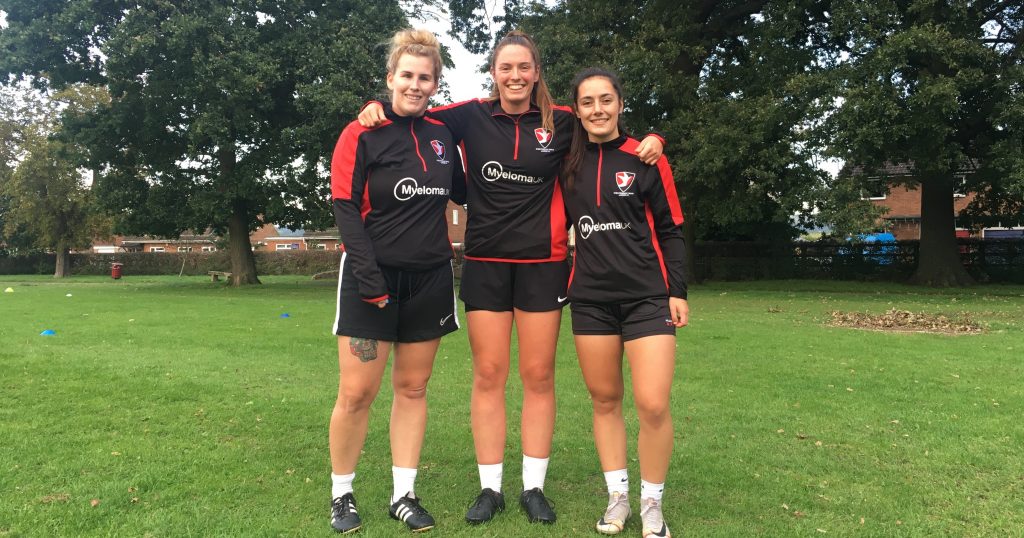 Following the announcement, Myeloma UK CEO, Laura Kerby, herself a former women’s footballer, welcomed the new partnership with The Robinesses, commenting:
“We are extremely grateful to Cheltenham Town Ladies Football Club for all their support and our logo on the new training kit will help raise awareness of myeloma. Myeloma is the third most common form of blood cancer in the UK and currently affects around 24,000 people with an average of 15 people a day being diagnosed within the UK. At Myeloma UK we strive to improve standards of treatment and care through research and education. Working with organisations like Cheltenham Town Ladies FC we can continue to raise awareness and improve earlier diagnosis for patients. We wish everyone at Cheltenham Ladies FC the very best of luck for the new season.”

Cheltenham Town Ladies Chairman, Andy Liddle, echoed the words of Laura Kerby, telling ctlfc.com:
“We are delighted to have partnered with Myeloma UK, and to proudly wear their logo on our new tracksuits this season. Everyone knows someone affected by cancer, and the earlier a diagnosis can be made, the better the potential outcome for those affected. We are keen to help raise awareness in conjunction with Myeloma UK over the coming season, and also to help drive further research and education.”
Tim and Michael Dudding’s nomination of Myeloma UK comes in memory of Tim’s grandfather, John Baker, with Tim commenting that he was “So please to see the legacy of granddad John Baker live on in the football world.”