My name is Allie, I have smouldering myeloma. I am 45 and live with my husband, Rog, in the heart of the Cotswolds. We have two daughters aged 20 and 23. I work in a local primary school, as a one-one Teaching Assistant and also taking care of attendance.

The journey to diagnosis

My diagnosis came about by chance, as I believe is common. I have suffered with migraines for quite some time, and while these were being investigated, a neurologist report included a term I’d come across which was related to myeloma. Then followed a referral to haematology, which our local hospital houses in a cancer centre – I wasn’t expecting that! I was, however, expecting to go in, talk to the doctor and be told it was all nothing to worry about. That was not to be. I was told they needed to do more tests, I’d be getting full body X-rays, a CT scan and, best of all, a bone marrow biopsy. I phoned a colleague at work and said I wouldn’t be returning to work that day. 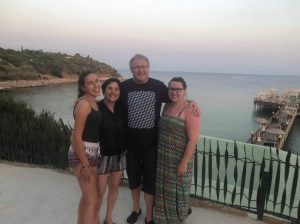 Being diagnosed with MGUS

When I went back for all of the results, I was told I had MGUS. MGUS is a condition where abnormal plasma cells produce a protein called paraprotein. I was told I would have regular monitoring.

I had blood tests every 3-4 months, and each time my paraprotein levels increased slightly, although in doctor speak they were called ‘stable’. When I was first diagnosed they were 12 g/L, and they slowly crept up until they hit 29 g/L about 18 months ago.

The ‘upgrade’ to smouldering myeloma

More tests! I had another bone marrow biopsy, booked in this time. I also had a really posh CT combined with some other new-fangled MRI thing, at a local private centre, as the wait was shorter. The combination of these tests confirmed I’d had an ‘upgrade’ to smouldering myeloma.

To be honest I’d known this was coming. The way my paraprotein numbers had been steadily increasing over the years led me to put two and two together and work out it was going to happen. This may sound strangely pessimistic, but I like to think of it as realistic. It meant I was prepared for the diagnosis, and it wasn’t a shock. Thankfully, since then the numbers have been stable. In fact, for the last 12 months the paraprotein readings have actually dropped to and stayed at 27 g/L. I’m hoping they stay that way and weirdly I don’t have that feeling that they’ll creep up again.

I hadn’t really told too many people, largely because I hate the pitying looks you get, but also because when I was first diagnosed my girls were young and going through an important time at school. I also didn’t really know what to say, as literally nothing could happen for years and I didn’t want to worry them. Then my husband got diagnosed with atrial fibrillation and had to have several procedures in hospital, which obviously put what I had to say on the backburner.

I finally started to tell more people when we decided as a family to do some fundraising, and wanted to raise money for Myeloma UK. We’ve held 3 Christmas lights switch-ons (the last one being virtual!) and two summer BBQs, each one raising over five hundred pounds.

Obviously, holding these events leads people to ask questions. Quite a few think they’ve got some helpful advice or comparisons. Most like to offer a cure, they question whether diet and exercise 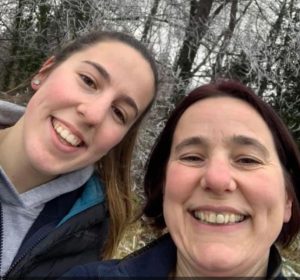 There are different trains of thought with regards to what you should read on the internet, but I’ve always made sure I look on reputable sites, Myeloma UK being a valuable source of information. This has meant I feel prepared when people ask questions. It doesn’t stop me saying that I’ve just got dodgy blood when people ask though!

I did find it hard to read a letter saying I was classed as clinically extremely vulnerable. I guess having something in black and white in front of you makes it real. My boss is very understanding, and because of the structure at work, I was able to work from home. It also meant I got my COVID jab early!

In some ways I do feel privileged as I am in the fortunate position that IF I progress to myeloma, the doctors will be ready and treatments can begin straight away. Sometimes patients are none the wiser that they have smouldering myeloma, and whilst that means they are not living under Damocles’ sword (a wonderful analogy given to me by a consultant!!), it also means that they may wait months for a diagnosis, particularly if there are no specialists in that area.

I have a very small group of people who check in and see how I’m really doing. But with most, if they ask, it’s just a general sweeping comment. I guess it can be difficult, especially when the ’C’ word is involved. I also am not one for dwelling on what might be. I don’t really want to talk about ‘it’ all of the time, so I can’t complain when people don’t ask, you can’t have it all ways! I personally find the easiest way of dealing with what may or may not happen is to deal with things if and when they do. You never know what is around the corner, but that goes for everyone.

Thank you to Allie for sharing her story. You can find out more about smouldering myeloma by calling our Infoline on 0800 980 3332.