Alan Hind has lived in Huddersfield his whole life and has been married to Dawn since 1985. The couple has two sons and a young granddaughter. Dawn was sadly diagnosed with myeloma in 2020. Unfortunately, Dawn was recovering in hospital post stem cell transplant when Alan turned 60 during the summer of 2021. Alan decided to set up a Facebook birthday fundraising page and was blown away by the generous donations.

We spoke to Alan about the impact myeloma has had on the couple and the success of his fundraising.

“The diagnosis in December 2020 was like a bombshell. Dawn had suffered from joint and back pains since August, and they weren’t getting any better. We’d already decided in our own minds that it was going to be something osteoporosis-related. The myeloma diagnosis, you might say, came from leftfield – an unexpected turn of events. The word cancer reverberates around your brain and you automatically start thinking: how long do we have left?”

The couple decided to learn as much about myeloma as they could. Dawn started researching stem cell transplants, and Alan started getting used to the twice-weekly chemotherapy sessions and the impact this was having on Dawn. 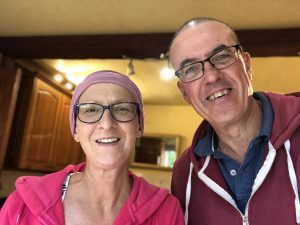 During their efforts trying to learn as much as they could about myeloma, Myeloma UK was the first place the pair found information. The Myeloma UK website provided information about the condition, the side effects and complications and its treatments.

They used the Ask The Nurse email service and Myeloma Infoline, which helped Dawn with some of her worries. They also downloaded publications available on the Myeloma UK website and kept them on their iPads. Alan said, “We found them very valuable in getting knowledge for the condition”.

On Saturday 12 June, Alan was at home alone while Dawn was in hospital in Leeds after having her stem cell transplant. Unfortunately, she would still be in hospital for his 60th birthday in a few days. Alan had seen how others had raised funds through Birthday fundraisers on Facebook but felt hesitant at first about asking for charity donations too regularly. He messaged Dawn first to check and she said she was happy for him to do it.

“To be honest, this was the easiest fundraiser I’d ever done. Straight away, Facebook friends started seeing the post and donating. I’d set a modest target of £150, which was quickly reached, and I amended it upwards before I rolled into bed. The figure kept rising through the night, on the 13th and my actual birthday on the 14th. We were getting donations from people I’d forgotten were friends on Facebook! A small number of people were unable to use the online payment route on Facebook, so I set up a JustGiving page.”

In the two weeks that the Birthday fundraiser was open, they watched the total grow to £3,552 with an extra £75 raised on JustGiving. In total 193, people donated, everything from £5 to £50, and Alan private messaged every donor to thank them personally.

“We even had ‘friends of friends’ donating who we didn’t even know – our friends had shared the appeal with their friends. I was flabbergasted by the final amount and the small amount of effort it took.

I’m so glad I did it. Originally, I’d hoped to raise a few hundred quid. Myeloma UK has done so much to provide support and understanding for sufferers and their families whilst funding important work to research more solutions.”

Alan’s fundraising efforts don’t stop there. He is raising funds through sales of the popular annual calendar ‘Huddersfield Train Station Cats’, which features the station’s resident cats, Felix and Bolt. Alan is the creator of the Twitter and Facebook page, which keeps the public up to date with the cat’s adventures. All proceeds will be donated to Myeloma UK.

We want to say a huge thank you to Alan for raising such an incredible sum to support our work, and wish him and Dawn all the best. If you are thinking of raising funds for Myeloma UK, to mark a celebration or you want to do a fundraising activity, we’d love to hear from you. Please get in touch by emailing fundraising@myeloma.org.uk or calling 0131 230 0429.