When Susan Mallick was diagnosed with myeloma, she was given a life expectancy of 3-5 years but went on to live with myeloma for nearly 20 years thanks to new treatments that became available. When she sadly passed away, she left a gift of £500 in her Will to Myeloma UK to support other myeloma patients and their families. We spoke to Susan’s husband, Donald about his wife’s life.

Susan and Donald met at Leeds University in 1963, where Susan was studying French, and they married two years later. The pair lived in the colonial territory of the New Hebrides (now Vanuatu) until the mid-70s. Throughout her life, Susan had a variety of jobs, including working as a secretary and a librarian. She was an avid reader and was interested in wildlife; in her retirement she volunteered with the Scottish Wildlife Trust. Susan had a keen interest in tennis and dance. 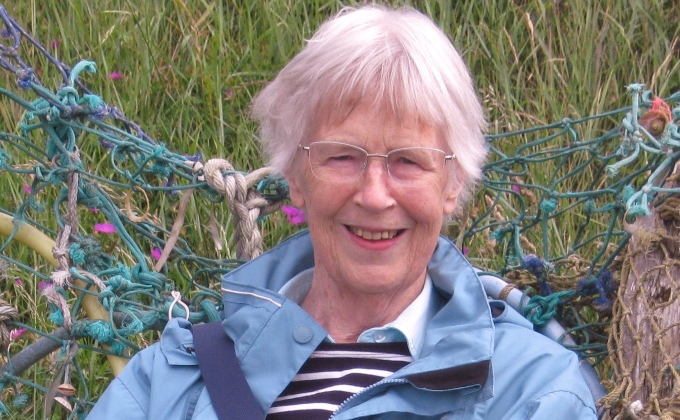 Susan at Low Newton in Northumberland, one of Donald’s favourite pictures – August 2017

“She was a quiet, even tempered and loving person, capable and knowledgeable, a good cook and was well regarded and loved by all. She was a loyal and loving wife and mother.”

The couple had two children, Alastair and Catherine, born in the New Hebrides  and returned to the UK, living in Harpenden, Keyworth and later in Edinburgh. Susan was diagnosed with myeloma in 1999 and received treatment on and off until she died in June 2019.

“She was grateful for the support and information provided by Myeloma UK and was a constant supporter of and contributor to the Edinburgh Support Group.”

Donald explained that the diagnosis came as a shock and there were challenging times throughout her treatment:

“Not surprisingly, a major concern was her myeloma and dealing with the side effects of the treatment. She had two stem cell transplants and numerous sessions of chemotherapy.

The toxicity of the drugs meant that how well and physically capable she was became very variable. There were bad times and she spent two periods in intensive care in the Royal Infirmary. But there were enough good periods to make all the treatment worthwhile.”

Despite the difficulties, she was surrounded by support:

“Luckily, family and friends were on hand to provide support when needed. However, despite feeling very low at times, she was uncomplaining and really asked for little support other than transport to hospital appointments.”

When asked about the decision to leave a gift in her Will to Myeloma UK, Donald said:

“Myeloma UK was much appreciated for the information it was able to supply to add to that provided at the Western General Hospital. Also important was the opportunity to meet other myeloma patients in the local support group. She was very supportive of the group.

She wanted to express her thanks for the support provided by Myeloma UK and wanted to contribute to its future work.”

“We are so grateful to Susan for leaving Myeloma UK a gift in her Will. Legacies are such an important source of income for us, allowing us to expand our work and be more ambitious to achieve faster and better results for myeloma patients. Each gift makes a vital contribution to our future success.”

If you would like to leave a gift in your Will to Myeloma UK, and help us to continue with our important work, please get in touch with our fundraising team on  0131 557 3332 or email fundraising@myeloma.org.uk.