Sam Gascoyne, 15, from Hagley near Stourbridge, set himself the ambitious task of completing 15 mini challenges before his 15th birthday in aid of Myeloma UK, the charity which has supported his family since his mother was diagnosed with myeloma in 2009.

Not only did the plucky teenager finish the #15B415 challenge three weeks ahead of schedule in August but he’s raised no fewer than £8,833 for the charity to date – and donations are still pouring in. Sam was presented with the BCyA Medal of Honour by Specsavers founder, Dame Mary Perkins, at the Palace of Westminster on Tuesday, 26 October in front of his proud mum, sister and dad. He was one of just 23 extraordinary young people to receive the 2021 British Citizen Youth Award.

Sam was just two years old when his mum Deb was diagnosed with myeloma, a rare incurable blood cancer which claims the lives of 3,000 people each year in the UK.

“I can’t remember a time when my mum didn’t have myeloma. She was only 34 years old when she was diagnosed and was only given two to five years to live. She was afraid she was never going to see me or my sister go to high school. Now I am in year 11 and my sister is in year 12. What a way we have come.”

The BCyA recognises the individual endeavours of young people who are positively impacting their communities, helping charities or undertaking exceptional activities in support of others.

Sam, who was nominated for the award by his mum and one of his teachers at Haybridge High School, Matthew Pritchard, kicked off his mammoth fundraiser back in November 2019 but soon had to contend with successive lockdowns and social distancing restrictions.

Undeterred, he adapted to the new normal and adjusted his plans – and expectations – accordingly, coming up with a range of mini challenges he could do from home.

Over the past two years the resourceful teenager has, among other things, sold 15 cakes, run 15km in 2 days, sourced 15 auction prizes and 15 raffle prizes, played 15 different sports, dared himself to stay silent for 15 hours, convinced celebrities including Nigel Owens, Adil Ray and Marian Keyes to tweet about his challenge, played on his Xbox for 15 hours straight and tried 15 new foods.

“COVID made it harder, but it didn’t make it impossible. I had to improvise and bring in a few more challenges. The most fun was probably spending 15 hours on the Xbox and trying different foods I hadn’t had before – zebra burgers were pretty nice.”

Keeping momentum going and his captive audience interested for close to 24 months proved tricky at times but when donations occasionally dwindled Sam turned to his mum for advice and drew inspiration from her unflagging resilience and optimism. 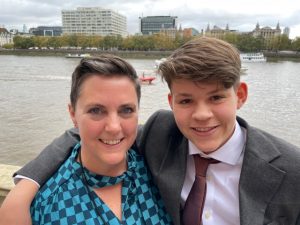 “At the start everyone was donating every time I did a challenge, but it slowed down as I went along. I had to keep pushing myself. I lost motivation a few times, but my mum found ways to get me back on it. Reaching your target gives you such a feeling of success. My initial target was £150 and I reached that under 24 hours, so I kept increasing it and reaching these new milestones. It gave me an incentive to keep going.”

“I’m really proud of him,” said Deb, 47, who works as a charity community fundraiser. “I’ve spent the last ten years fundraising for Myeloma UK and for me, it’s been a way  to control my situation. Sam knows it’s given me a purpose but for a 13-year-old to decide to do such a big challenge… Not many kids would do something like this and he did it in great spirits.”

Sam’s teacher, Matthew Pritchard, added: “We are extremely proud of Sam’s achievement. He has always been an extremely conscientious and driven young man but with his #15B415 challenge he outdid himself. To raise any amount of money is brilliant, but for a cause so close to his heart and to raise almost £9,000 with schoolwork, extracurricular activities and in the middle of a global pandemic is nigh on unbelievable. Well done Sam, a great example to us all.”