We talked to triathlon club member, Fiona Campbell about raising funds for Myeloma UK and in support of her husband Graeme, a myeloma patient.

Fiona and Graeme live in Burton on Trent with their two children, Dylan (11) and Erin (9). Graeme was diagnosed with myeloma in October 2019 at the age of 50.

Fiona spoke of Graeme’s diagnosis and how it has affected their family: 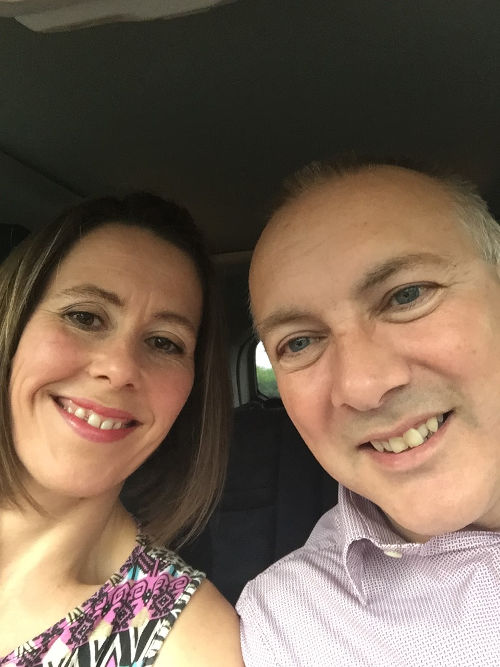 “Myeloma has had a huge impact on the family. His symptoms started with severe back pain, which eventually started to radiate into his rib cage. He visited the GP a couple of times as the pain changed from his back to his rib cage, and following an x-ray and then a blood test at hospital, he was rushed up to the renal unit with only 3% kidney function. This is where the diagnosis of multiple myeloma was made and has changed the rest of our lives forever.”

Graeme played an active role in managing his son’s football team and regularly refereed. Although his initial treatment significantly improved his symptoms, he was unable to get back to his active roles with the football team and refereeing. He did manage to get back to work, albeit part-time. Unfortunately, after 3 months, we were told the devastating news that the treatment had stopped working, and his myeloma was on the increase again.

Therefore, his stem cell transplant was on hold until they could lower the effects of the myeloma again. He has had to endure 2-rounds of intensive inpatient chemotherapy, away from his family, and to add insult to injury – he broke his arm doing something so simple, which required pinning and plating. He has had to have all this treatment during the ongoing COVID-19 crisis, which adds to the stress of it all.

The side effects have left him with dreadful taste, no appetite, and no energy. The kids haven’t got a daddy at the moment who can play with them. I would say the quality of life for my husband is very low, with no real joy. However, staying positive is key, and we feel we are ¾ of the way up a very steep mountain to get to his stem cell transplant, which we hope will eventually give him some degree of normality back to his life.”

Fiona has been a member of Burntwood Triathlon club in Staffordshire for over 17 years, and the idea to raise funds came from her fellow club member, Charlotte Morley. The club joined in with the recent 2.6 Challenge to raise money for UK charities who have lost funds from events like the London Marathon, due to the COVID-19 pandemic. The club chose to support Myeloma UK because of Fiona’s connection. They have currently raised over £1,250!

They did this by taking part in one of the following challenges and asked for donations from friends and family, including:

When speaking of the importance of supporting Myeloma UK’s work, Fiona said:

“Myeloma is such a rare cancer, and it helps to raise awareness of this largely unknown cancer. The research is vital to find better treatments to help those live longer, along with a good quality of life. Hopefully, one day there may be a cure or at least that many treatments available that it becomes a chronic cancer that people can live with for the rest of their lives.”

We’d like to give a big thank you to the Burntwood Triathlon club for supporting Myeloma UK. If you’ve been inspired, find out more ways you can raise funds.